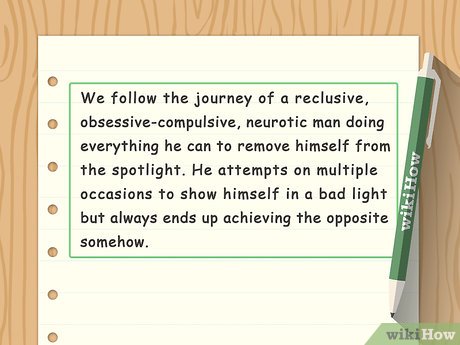 There are 18 references cited in this article, which can be found at the bottom of the page.
Tips on Crafting a Setting:
Brainstorming descriptions: Write the down names of your settings, such as “small colony on Mars” or “the high school baseball field.” Visualize each place as vividly as you can and jot down whatever details come into your head. Set your characters down there and picture what they might do in this place.
Thinking about your plot: Based on your characters and the arc of your plot, where does your story need to take place? Make your setting a crucial part of your story, so that your readers couldn’t imagine it anywhere else. For example, if your main character is a man who gets into a car crash, setting the story in a small town in the winter creates a plausible reason for the crash (black ice), plus an added complication (now he’s stranded in the cold with a broken car).
Don’t overload the story. Using too many settings might confuse your reader or make it hard for them to get into the story. Using 1-2 settings is usually perfect for a short story.

STEP TWO: WHO – introduce/describe the characters. Describe what you did/saw/heard/smelt.
Now I leaned heavily on the rusty shovel in my hands and started to dig, determined to uncover the truth. The scar-faced man beside me began to dig at the other end and soon my brother’s coffin began to emerge from beneath the layers of sodden earth. Faced with this moment of truth, I began to panic. What if I was wrong? I knew Karl hated the army, I knew he wanted out. His girlfriend Sarah hadn’t turned up at the funeral, hadn’t contacted her family in the two months since his death. But maybe she just needed some space?

It was another early sunset on a rainy day in Seattle. Andrew was walking with a paper bag of groceries back to his downtown studio…
Jason glanced at his watch and his heart started to beat twice as fast—he was late. He accelerated his pace, but there still were two…

I heard layers of frozen ice crystals crunch beneath me. Had I dreamt the spring? Was I going mad? Perhaps I had eaten a bad nut, and it had made me hallucinate. I would have cried with misery if it had not been so cold, but my tears froze before they could trickle down my cheeks. Scrabbling to my feet, I began to trudge forwards. Little holes appeared in the snow as I walked, and my tail left a narrow, sweeping trail between them as if a starved snake was following me. Out of the corner of my eye, I noticed a vivid patch of yellow. It was like a splash of paint on a blank canvas, and I could not help but be drawn towards it.

[To download any of these stories right click on the story link and “Save Link As” (if using Windows) or “Download Linked File” (if using Mac). Feel free to duplicate the files below and give to others. These are MP3 audio files.]